What you can do with the energy produced by solar panels

We helped another customer generate his own electricity – we installed an Off Grid Solar Inverter in Greece, Xanthi. The Greek branch of Voltacon installed a complete off grid solar solution for a country house in the municipality of Xanthi. The owner of the property used to spend a few hours  there every weekend to enjoying  the sun shine and fresh air. Unfortunately it was really inconvenient to stay any longer because there was no electricity. The application to the energy company for a new power line would have costed him over €5,000.

Having invested €3,900 , he produces enough power to use all his electrical appliances and lights. As a result he can spend a long weekend in his country home in a very comfortable and safe environment. The solar off grid kits includes: 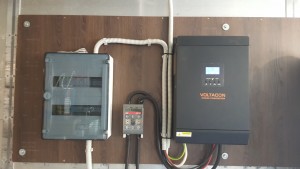 The control panel with consumers unit, DC fuses and Conversol off grid solar inverter and charger

The solar panels were arranged in small groups of 2 panels in series and 2 strings in parallel. The DC input voltage from the panels is 74Volts with a total current 3×8.24Amps = 24.7Amps 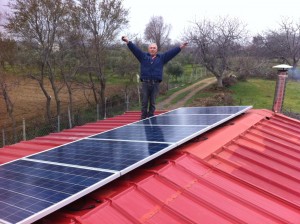 Another happy customer that generates his own electricity

The lead acid batteries  can store up to 2.5kWh per day. The Amper hours Ah capacity at 20 hour rate is 250Ah. We used only 4 batteries in series to establish a DC bus of 24V.

Electrical & Electronic Engineer at Voltacon Power Conversion. An inventor and product developer in renewable energy with over 15 years experience. Previous experience in the R&D centres of Almost Power and General Electric.